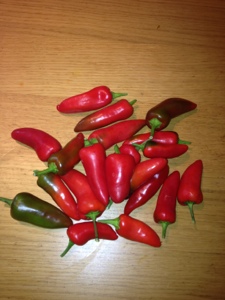 With an abundance of hot chillies and bell peppers from the greenhouse I decided to make my husbands favourite Sweet Chilli Jam recipe. It goes brilliantly with chicken, pork, turkey or any other type of meat. To be honest, we have it with everything!

I had to adapt my recipe and substitute some of the red bell peppers with yellow. This didn’t affect the taste though.

Tip the peppers, chillies (with seeds), ginger and garlic into a food processor, then whizz until very finely chopped. Scrape into a heavy-bottomed pan with the tomatoes, sugar and vinegar, then bring everything to the boil. Skim off any scum that comes to the surface, then turn the heat down to a simmer and cook for about 50 mins, stirring occasionally.

Once the jam is becoming sticky, continue cooking for 10-15 mins more, stirring frequently so that it doesn’t catch and burn. It should now look like thick, bubbling lava. Cool slightly, transfer to sterilised jars, then leave to cool completely. Keeps for 3 months in a cool, dark cupboard – refrigerate once opened.

This entry was posted in Recipes and tagged bell pepper, Chilli, jam, recipe. Bookmark the permalink.